The Iranian Nuclear program and IAEA. 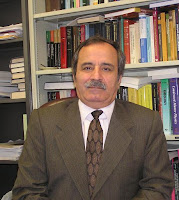 Muhammad Sahimi is a Professor of Chemical Engineering and Materials Science, and holds the NIOC Chair in petroleum engineering at the University of Southern California (USC) in Los Angeles. Sahimi received his B.S. degree in Chemical Engineering from the University of Tehran and after briefly working for the National Iranian Oil Company (NIOC), he received a scholarship from the Atomic Energy Organization of Iran and travelled to the USA, where he has since remained, completing his PhD at the University of Minnesota in 1984.  Since 2003, Dr. Sahimi has frequently written on the subject of Iranian politics, particularly the Iranian nuclear program. His writings have been published in Los Angeles Times, the New York Times, the Wall Street Journal, The Huffington Post, the Harvard International Review, and The Progressive.

Posted by Qasedak at 7:37 PM No comments: