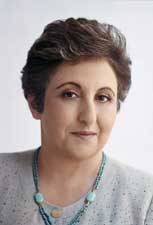 Shirin Ebadi is an attorney and former judge who has worked passionately for the rights of the politically oppressed in Iran for over 30 years. The first Muslim woman to win the Nobel Prize, she asserts that it is patriarchal attitudes in the Muslim world that restrict human rights, not Islam itself, which she views as a religion of peace and tolerance. A vocal opponent of foreign interference in Iran’s domestic politics, she will challenge our thinking about the future of Islamic societies.

Posted by qAsedak at 1:59 PM No comments: