A live interview with Professor William Beeman, University of Minnesota, and Reza Marashi, Policy Director with National Iranian American Council on issues related to sanctions and threats of war with Iran.  Panel also reviewed President Obama's change of policy on Iran from negotiations to pressure and hostile track. 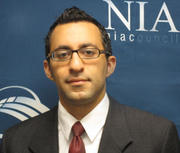 Reza Marashi joined NIAC in 2010 as the organization’s first Research Director.  He came to NIAC after four years in the Office of Iranian Affairs at the U.S. Department of State.  Prior to his tenure at the State Department, he was an analyst at the Institute for National Strategic Studies (INSS) covering China-Middle East issues, and a Tehran-based private strategic consultant on Iranian political and economic risk. Marashi is frequently consulted by Western governments on Iran-related matters.  His articles have appeared in The New York Times, Foreign Policy, The Atlantic, The National Interest and Al Jazeera, among other publications. He has been a guest contributor to the BBC, NPR, Financial Times, Reuters, and ABC News, among other broadcast outlets.  Follow Reza on Twitter: @rezamarashi

Professor Beeman is an internationally known expert on the Middle East and the Islamic World, particularly Iran, the Gulf Region and Central Asia. He has also conducted research in Japan, India, Nepal, China and Europe. From 1996-1999 he sang professionally in Europe as an operatic bass. He continues his musical career.  His scholarly interests and research include sociolinguistics and the semantics of interaction; cross-cultural comparison of theatrical and performance genres; opera; paralinguistic and nonlinguistic semiotics; action anthropology; philosophic anthropology; peasant and nomadic societies.