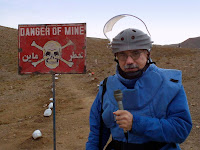 Goudarz Eghtedari interviews Reese Erlich the author of "Conversations With Terrorists: Middle East Leaders on Politics, Violence, and Empire" on Voices of the Middle East.

The second half of the show is an interview with Osamah Khalil about the Israeli settlements in the occupied territories and Obama's attempt to deal with it.

Reese Erlich is a best-selling book author and freelance journalist who writes regularly for the Dallas Morning News, Canadian Broadcasting Corp. Radio and National Public Radio. He has won numerous journalism awards and he was a segment producer on a radio series that won a Peabody award. Erlich was born and raised in Los Angeles. In 1965 he enrolled at the University of California, Berkeley, and later became active in the anti-Vietnam War movement. In October 1967 Erlich and others organized Stop the Draft Week. They were arrested and became known as the "Oakland Seven." In their trial they were acquitted of all charges, being successfully represented by Charles Garry.

Osamah Khalil is co-director of Al-Shabaka, The Palestinian Policy Network. He specializes in Palestinian politics and history, US foreign policy in the Middle East and the Palestinian-Israeli conflict.

Khalil commented: “Israel's settlement policy perpetuates its occupation of the Palestinian territories and undermines American attempts to resolve the Palestinian-Israeli conflict. Without American largesse, Israel's occupation could not continue. The US can either broker a final peace accord or it can continue to subsidize settlements -- it cannot do both.”
Posted by qAsedak at 10:52 PM No comments: