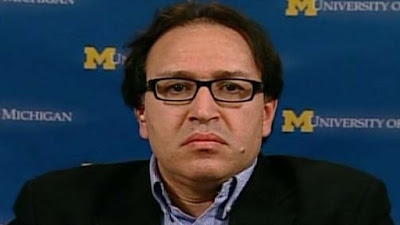 Program date: Fri, 03/11/2011
Click here to listen to this broadcast!
Popular uprising in the Middle East and North Africa has expanded to Bahrain, Yemen and Libya, but unlike Tunisia and Egypt, people in these countries have faced fierce resistance from the government supporters. While West is considering military interventions or some sort of press for no fly zone over the Libya, US is asking Yemenis people to accept Ali Abdullah Saleh's reform initiatives and calm down the unrests.

I interviewed Professor Ali Ahmida on situations in Libya. Ali Ahmida is a professor and chair of the Department of Political Science at the University of New England, Biddeford, Maine. His specialty is political theory, comparative politics and historical sociology of power, agency and anti-colonial resistance in North Africa, especially modern Libya. He is the author of The Making of Modern Libya: State Formation, Colonization and Resistance (1994) in addition to numerous articles. He is editor of Beyond Colonialism and Nationalism in the Maghrib: History, Culture and Politics (2000).
Posted by qAsedak at 6:25 PM No comments: