Click here to listen to a recording of this Interview!

If you are interested in the topic of Iranian Liberalism and Western Left, I am interviewing Danny Postel writer of the book "Reading Legitimacy Crisis in Iran" on my radio program on KBOO 90.7 FM at 6 PDT coming Thursday 4/12/07 program is webcast at www.kboo.fm click on the listen live icon. Danny has just come back from a two weeks trip to Iran in March. Just to give you an exposé to the book, I suggest following review by Rafia Zakaria.

Danny Postel is a journalist and critic living in Chicago. He is a Senior Editor of openDemocracy, an online global magazine of politics & culture; a Contributing Editor to Dædalus, the journal of the American Academy of Arts & Sciences; a member of the editorial board of The Common Review, the magazine of the Great Books Foundation; and an Editor-at-Large of Stop Smiling.

In 1991 he was on the editorial collective of Left Green Notes, the magazine of the Left Green Network. From 1996-1999 he hosted Free Associations, a weekly radio show in Chicago about politics, culture, and books. In 2000-2001 he was editor of philosophy and then history & humanities at Britannica.com, the late online magazine of Encyclopædia Britannica. From the fall of 2001 until the spring of 2003 he was a staff writer for The Chronicle of Higher Education, where he covered philosophy, history, political theory, Middle Eastern studies, and African studies.

He has taught journalism at Columbia College in Chicago; English as a Second Language at St. Augustine College and at the Howard Area Community Center in Chicago; and Spanish in a Chicago elementary school. He is the author of Reading Legitimation Crisis in Tehran: Iran and the Future of Liberalism, forthcoming from Prickly Paradigm Press in October, and the editor of The Shadow of Kosovo, an anthology exploring the debate amongst leftists over the Kosovo war, forthcoming from Cybereditions. 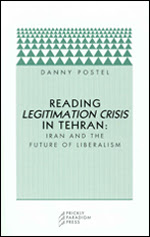 An indictment of the Western Left, which has abandoned Iranian liberals in their fight for freedom and democracy.

IN unravelling the grand universalism of the Modern project, post-modern thinkers arrived at a conception of authenticity that eschewed the imposition of Western ideas on the misunderstood `other'. They proclaimed the death of universalism and left behind a philosophical legacy that presented diverging paths for the Western and non-Western world. For the Western Left, the acknowledgement of complicity in the exploitative projects of colonialism and the recognition of the distorted perspectives of orientalism brought in its wake an unquestioned veneration of those aspects of the non-Western `other'. For the non-Western world, the post-modern legacy meant the rejection of all that bore the imprimateur of the oppressive `other' and led to a search for a pre-colonial truth unmarred by Western influence. In the ideological confusion that followed, religious fundamentalism clothed itself in the robes of authenticity and produced a political discourse that thrives on the crude evaluative principle that ideas have singular geographical sources that dictate the status of their authenticity and relevance. In countries such as Iran, anti-imperialist arguments have been appropriated by theocracy and religious faith manipulated as a means to delegitimise any and every form of dissent.

The unfortunate geopolitical cataclysm resulting from these divergent prescriptions and the subsequent stagnation of the Western left are the subjects of Danny Postel's short volume entitled Reading Legitimation Crisis in Tehran: Iran and the Future of Liberalism. Based on an engaging play of words, the title of the book draws from liberal philosopher Jurgen Habermas' volume entitled Legitimation Crisis and Azar Nafisi's recent book Reading Lolita in Tehran. Postel argues that observing liberalism through an Iranian lens reveals the failure of the Western Left to emerge from the myopia that prevents it from accepting the reality that the `other' can engage with and have indigenous connections with ideas that may be punctuated by similarity rather than difference. In honing in on this, Postel identifies how the limitations that bound the orientalists of yore have indentured a new breed of Western leftists in a different but equally lethal servitude. These new prisoners, indoctrinated to expect only difference from the `other' are as indignant in their fervour to discard similarity as their orientalist predecessors were to fetishise the `other'.

In a succinct but hard-hitting argument, Postel uses the case of Iran to illustrate how liberal movements within Iran have begun the arduous but necessary political project of extricating liberal ideas from the snare of automatic delegitimisation at the hands of fundamentalist theocrats. Postel frames his introductory argument against Nafisi's brilliant explication of how reading any text within a certain context, regardless of its distance from the point of production, provides novel insights and sources of introspection. In Nafisi's own words: "[T]he West's gift[s] to us have been Lolita and [The Great] Gatsby, while Iran's gift to the West has been reasserting those values that you now take for granted." The dialogue between civilisations thus construed is not as a reductionist exchange of two alienated `others' defined solely by their differences. Instead it emerges as an interchange in which "landscapes and localities undergo symbolic metamorphoses, and that experiences once localised at a given place increasingly find echoes or resonance chambers among distant societies and peoples".

Postel goes on to describe how the "renaissance of liberalism" taking place in Iran relies not simply on a blind and ravenous consumption of the writings of liberal thinkers such as John Stuart Mill, Isaiah Berlin and Karl Popper. It is instead a process that combines the ideas of liberal thinkers with liberal concepts in Iranian history. Postel's use of this dual approach, which indigenises liberalism through an analysis of the liberal origins of the Iranian constitutional revolution of 1905-1911, gives liberal ideas an identity that is both authentically Iranian and contextually relevant. Through interviews with Iranian intellectuals such as Ramin Jehanbegloo - in jail since 2006 for his support for liberal ideas - Postel guides the reader into a country where a resuscitated liberalism is the subject of vibrant debate amid an engaged public that is hungry for reform and committed to the liberal principles of respect for human rights, democracy and the rule of law.

The most astute argument presented by Postel is his revelatory account of how Western leftists, by prioritising their own opposition to American imperialism, have abandoned Iranian liberals in their fight for freedom and democracy. Postel vehemently renounces the argument that support for pro-democracy interests in Iran somehow amounts to supporting the neo-conservative agenda. He presents engaging ideas as to how Iranian liberals have accomplished this very task. He relates in detail how Iranian human rights activists such as Akbar Ganji shun any contact with the United States government when visiting the country and focus solely on engaging with scholars, human rights organisations and civil society groups. Postel recounts an incident in which Nobel Peace laureate Shirin Ebadi, during a visit to the U.S., was confronted by an anti-war protester who suggested that she stop talking about human rights abuses in Iran because her arguments could be appropriated by the neo-conservatives. Ebadi's response was clear and unequivocal: "Any anti-war movement that advocates silence in the face of tyranny can count me out." Iranian intellectuals, despite being in the direct line of fire of the neo-conservative military agenda, are demonstrating that fighting the expansionist military agendas of the Bush administration does not require silence about the injustices perpetrated by the Iranian regime.

This same conundrum confounds Western liberals. They, as Postel documents, have been silent in the face of repeated student protests in Iran, imprisonment of Iranian activists and numerous other human rights violations that should have logically attracted their support. They are so locked in the singular prism of anti-imperialism that they are unable to make peace with the idea that it is liberalism rather than radicalism that is the true fighting creed in Iran. They are even less amenable to the reality that "the denunciations of U.S. Empire in Iran today are the rhetorical dominion of the Iranian Right, not the Left". As Postel states, "it is the reactionary clergy who wield the idiom of anti-imperialism and regime hardliners [who] legitimate the suppression of Iranian students". This aversion to recognising reality in Iran has exacted a huge cost; it has delegitimised the Western left and exposed its disinterest in championing the cause of Iranian liberals and pro-democracy fighters who suffer daily at the hands of an increasingly repressive regime. Postel exposes how the insistent prioritisation of anti-imperialism over all else has produced a repugnant inversion of itself - a new form of imperialism equally blind in its U.S.-centric perspective as its ugly counterpart.

Postel's conception of the `other' imperialism draws heavily from his discussion of Janet Afary and Kevin Anderson's book Foucault and the Iranian Revolution: Gender and the Seductions of Islamism (University of Chicago Press, 2005). The connection to this recent work that documents Foucault's writings on Iran and his naïve fascination with the Iranian revolution as a positive project of "political spirituality" is important because it places the current reluctance of the Western left to get involved with Iran in the context of post-modern philosophical thought. As Postel argues in his discussion of Afary and Anderson's work, Foucault's stance on Iran was marked by a rejection of the scepticism that characterised his stance on Western institutions of power. Instead Foucault adopted a heady and misguided optimism that embraced theocracy because of its sheer "difference" rather than its ability to govern equitably and respect human rights. The discussion of Foucault's encounter with Iran is also important because it presents how post-modern philosophical estimations of the `other' have evolved out of what is judged by Westerners to be most authentic about the `other' - in this case the most exotic and most different aspects of Islam. Despite its brevity, Postel's work raises urgent questions about the orientation of the Western left towards pro-democracy movements in different parts of the world. He deftly deconstructs how judging the "other" through the ethnocentric lens of Western philosophical ideas and political imperatives is to blame for the geopolitical messes that define contemporary world politics. Opposition to neo-conservative agendas and military intervention should not mean ignorance of local forces fighting oppression from a different source. The result of the configuration that Postel exposes is that engagement with struggles for liberty and the rule of law has been duplicitously cast in `all or nothing' terms. Involvement is equivocated with supporting the neo-conservative zeal of the Bush administration and opposition is understood as the knowing ignorance and lack of support for those who may fight a different but equally repressive enemy.

This book is a timely indictment of the Western left's apathy, which justifies itself by constructing a deceptively dualistic model of Western engagement with the world. The time has come for the emergence of a new "radical" liberalism that rejects such misguided political perversions and reclaims the right to both engage with the struggles of human rights defenders and pro-democracy activists in Iran and elsewhere, and denounce the Bush administration's tyrannical politics of military intervention.
Posted by qAsedak at 9:32 PM No comments: