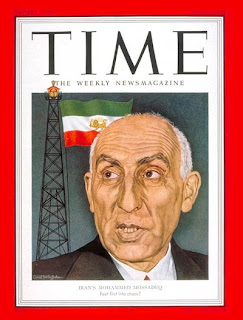 August 19th will be the 57th anniversary of a Coup D'etat in Iran that removed democratically elected Prime Minister Dr. Mohammed Mossadegh and brought back the Shah. BP's recent operations in the Gulf of Mexico has brought back the references to the coup and it is time to revisit the history of the Coup once again to better understand what people of Iran felt at the time when a company like BP was instigating regime change and CIA was implementing it.

Ironically I am going to interview Professor Gasiorowski, from Baton Rouge , Louisiana for this issue and premiering of another historical moment in Iran 's history of 1979. I’ll be talking with Professor Gasiorowski about the 1953 Coup, the role of British Petroleum, BP (then known as Anglo-Iranian Oil Company). We will further expand on Mark’s new research about the events prior to Students take over of the US Embassy in Tehran after the revolution of 1979.

Mark Gasiorowski (1954, ) is a professor of Political Science at Louisiana State University . He is an expert in Middle East politics, Third World politics, and U.S. foreign policy. He holds a joint appointment in Louisiana State University's International Studies Program. He has been a Visiting Fellow at St. Antony's College, Oxford University and a Visiting Professor at Tehran University. He has extensively researched on CIA Coup D'etat in Iran of 1953 that removed democratically elected Prime Minister DR. Mossadegh and brought back dictatorship of Shah of Iran. Journalist and academic Stephen Kinzer has called him "the most persistent" of "a small but dedicated group of scholars [who] have devoted considerable effort to uncovering the truth about events surrounding the 1953 coup" in Iran, an event so important (Kinzer believes) it "defined all of subsequent Iranian history and reshaped the world in ways that only now becoming clear."
Posted by qAsedak at 3:34 PM No comments: