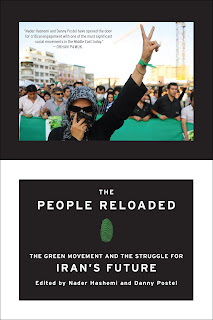 Program: Voices of the Middle East
Program date: Fri, 05/13/2011
This is recording of an interview with Nader Hashemi and Danny Postel about their new book: "The People Reloaded: The Green Movement and the Struggle for Iran's Future." Second part of the show is a reflection by Barry Amundson the survived brother of a 9-11 victim on killing of Usama Bin Laden.
Please Click here to listen to this program on-demand!

Arab rebellion continues and while West picks and chooses what to support and what not, people in both sides are following the dreams for a democratic future in the region. <--break->Some argue that Green movement in Iran after the elections of 2009 ignited the post modern indigenous uprisings in Egypt, Tunisia, Yemen, Bahrain, Libya, and now Syria. My guests are of the believe that new generation of the Middle Eastern are fed-up with autocracy and are in pursuit of a anti-colonial, yet modernized system of governance across the region.

Nader Hashemi teaches Middle East politics at the Josef Korbel School of International Studies at the University of Denver, and he is the co-author with Danny Postel of "The People Reloaded: The Green Movement and the Struggle for Iran's Future." Danny Postel is the author of “Reading Legitimation Crisis in Tehran: Iran and the Future of Liberalism (Paradigm)”.

This month, US was able to attack and Kill al-qaeda leader Usama Bin Laden in the Pakistani town of Abotabad. The incident ended a self proclaimed decade of war against terror as was defined by US administrations since 2001, while President Obama now can claim the victory on behalf of victims. I have interviewed Barry Amundson a local member of the progressive community whose brother was killed during the 9-11 attack on Pentagon in Washington DC. Barry talks about his personal view of the killing of UBL and his right as survived brother of a victim of the crime the terrorists of 9-11 committed.
Posted by qAsedak at 10:16 PM No comments: